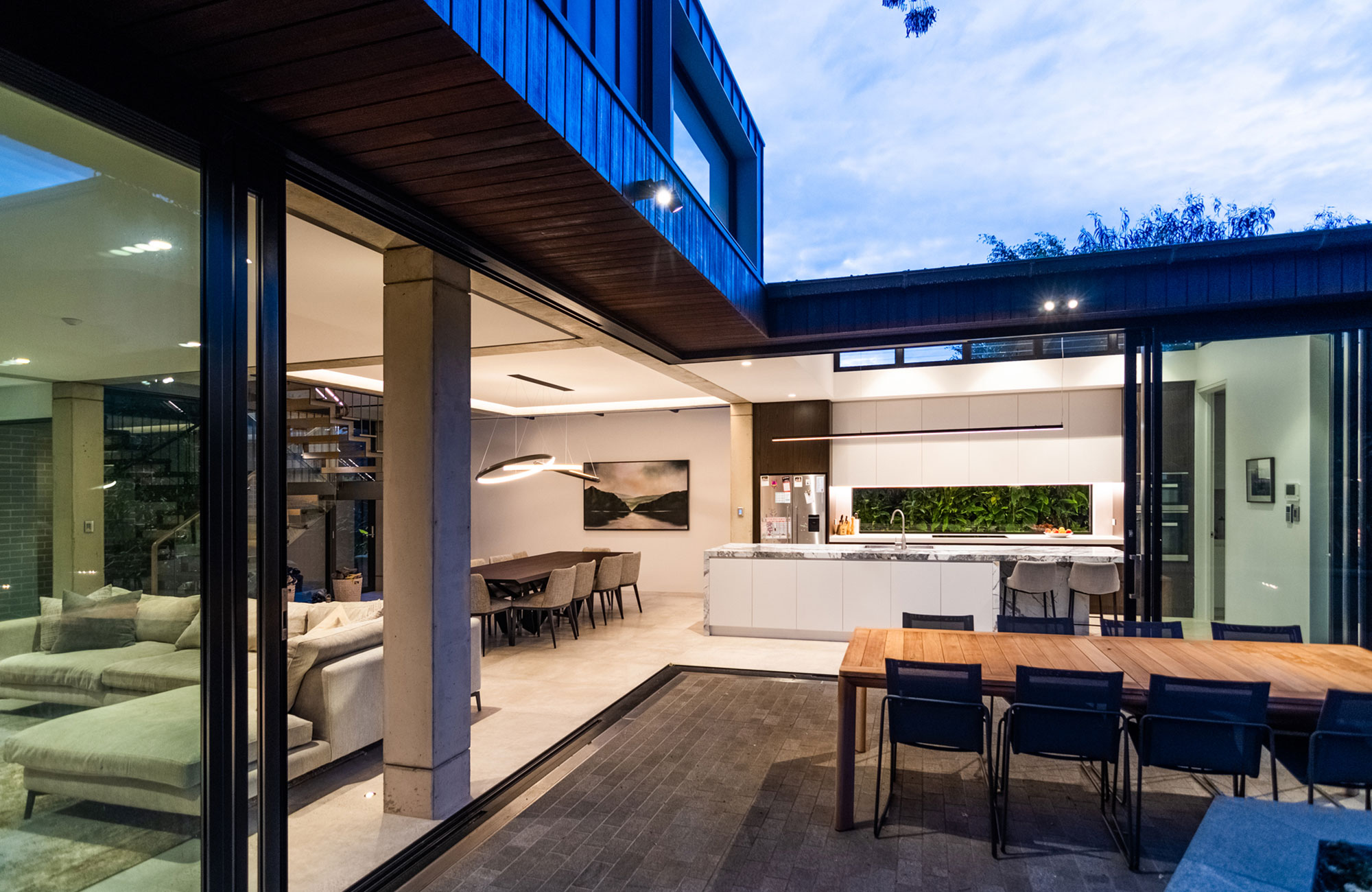 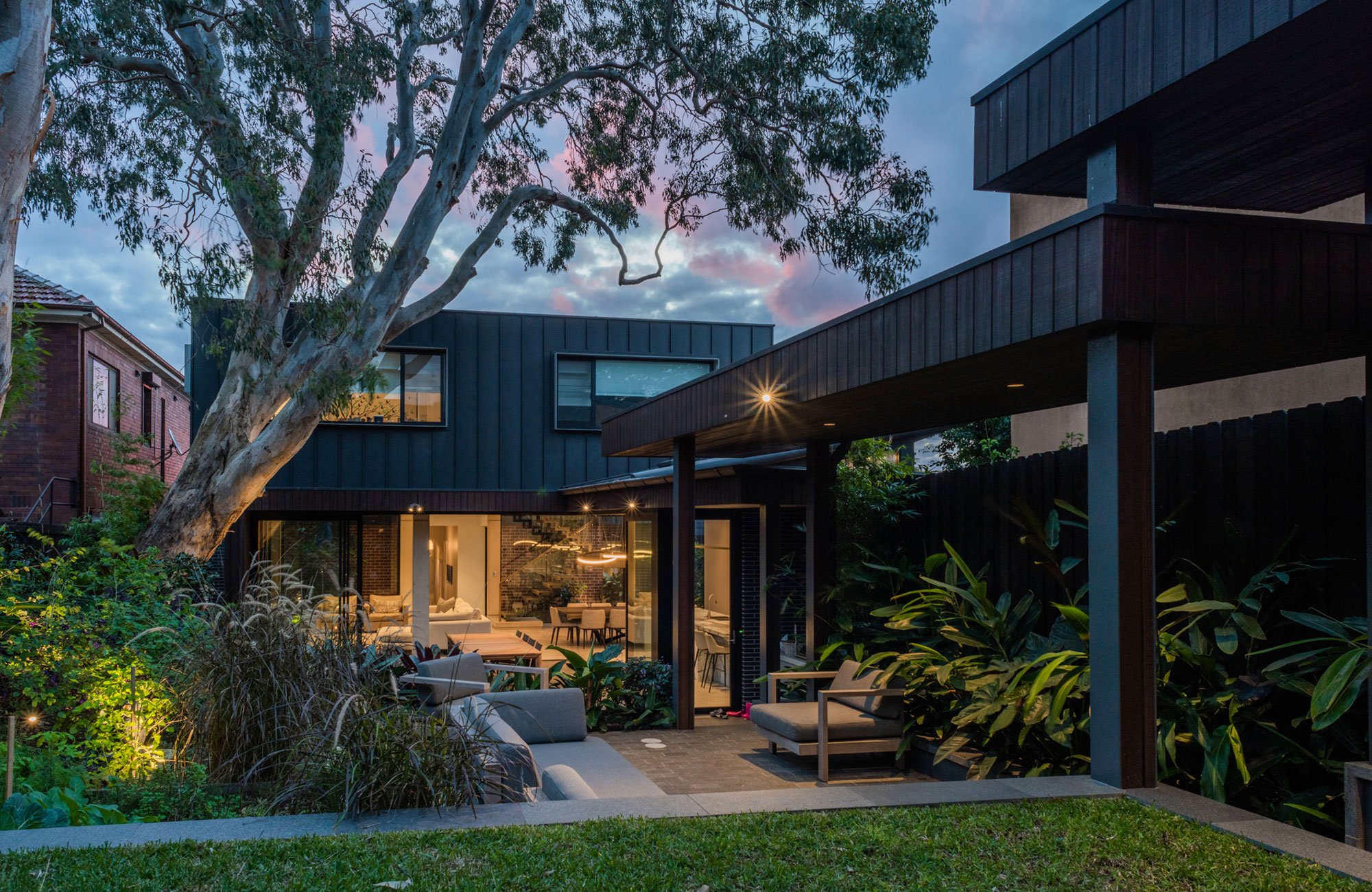 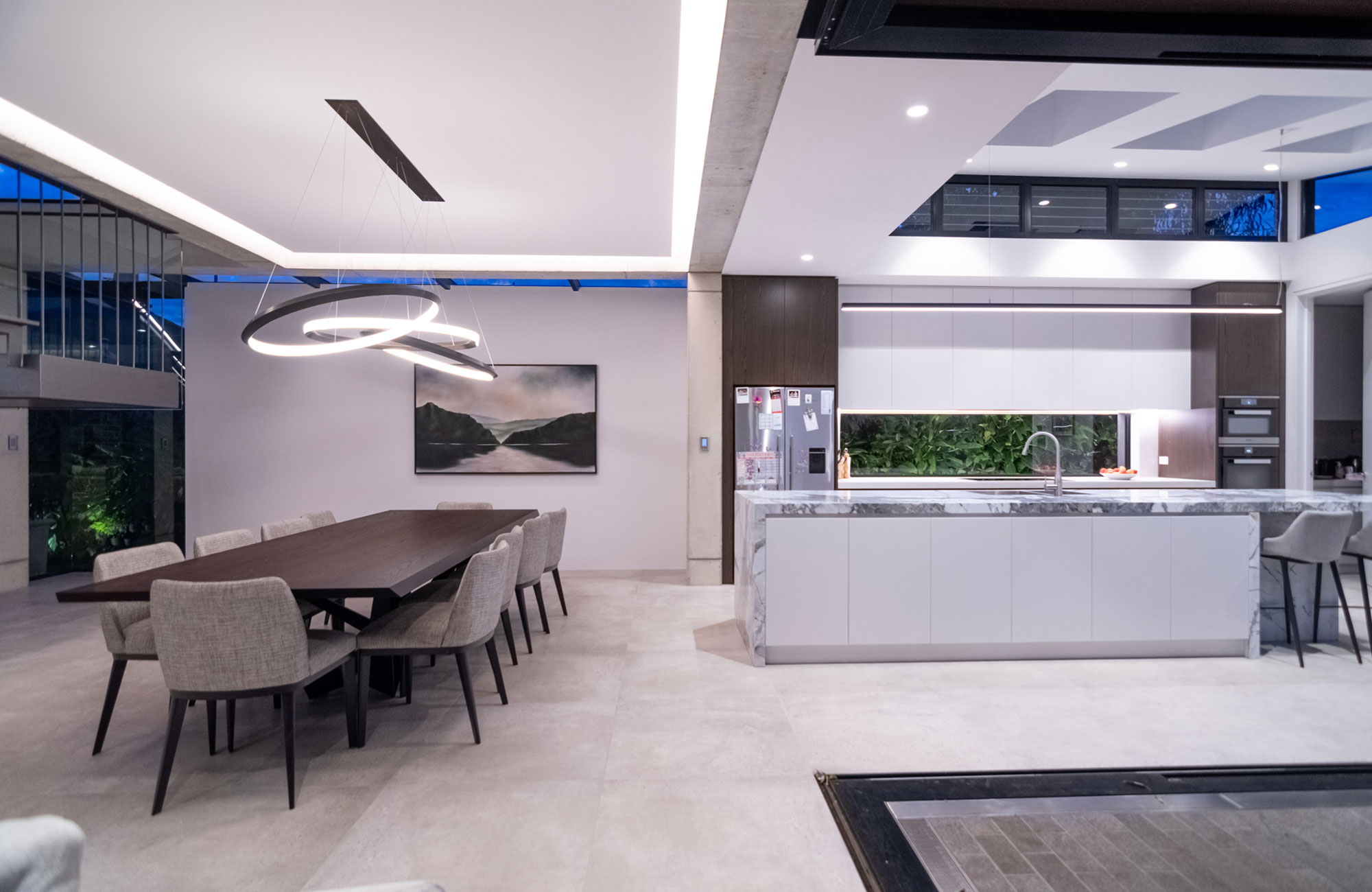 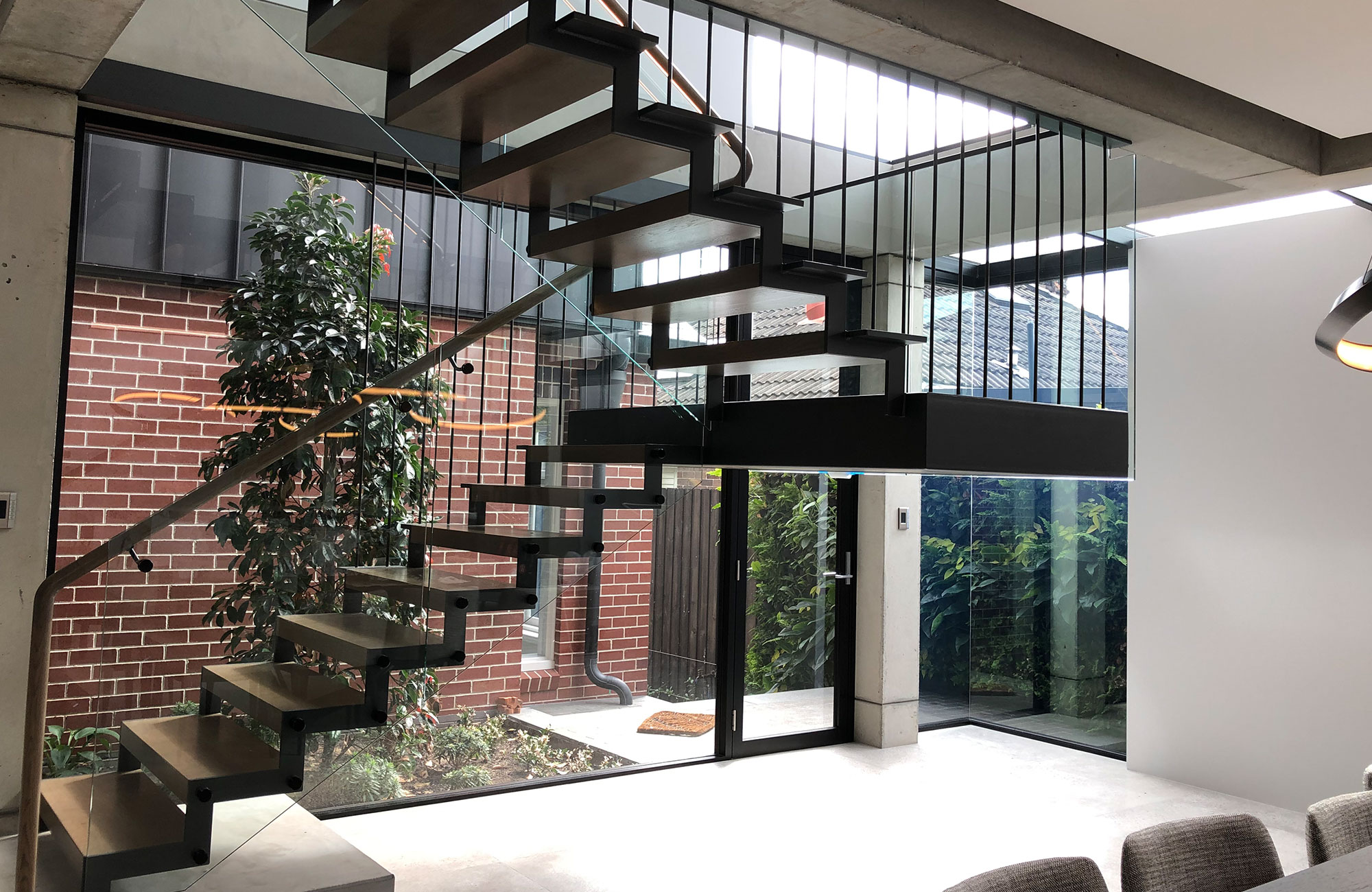 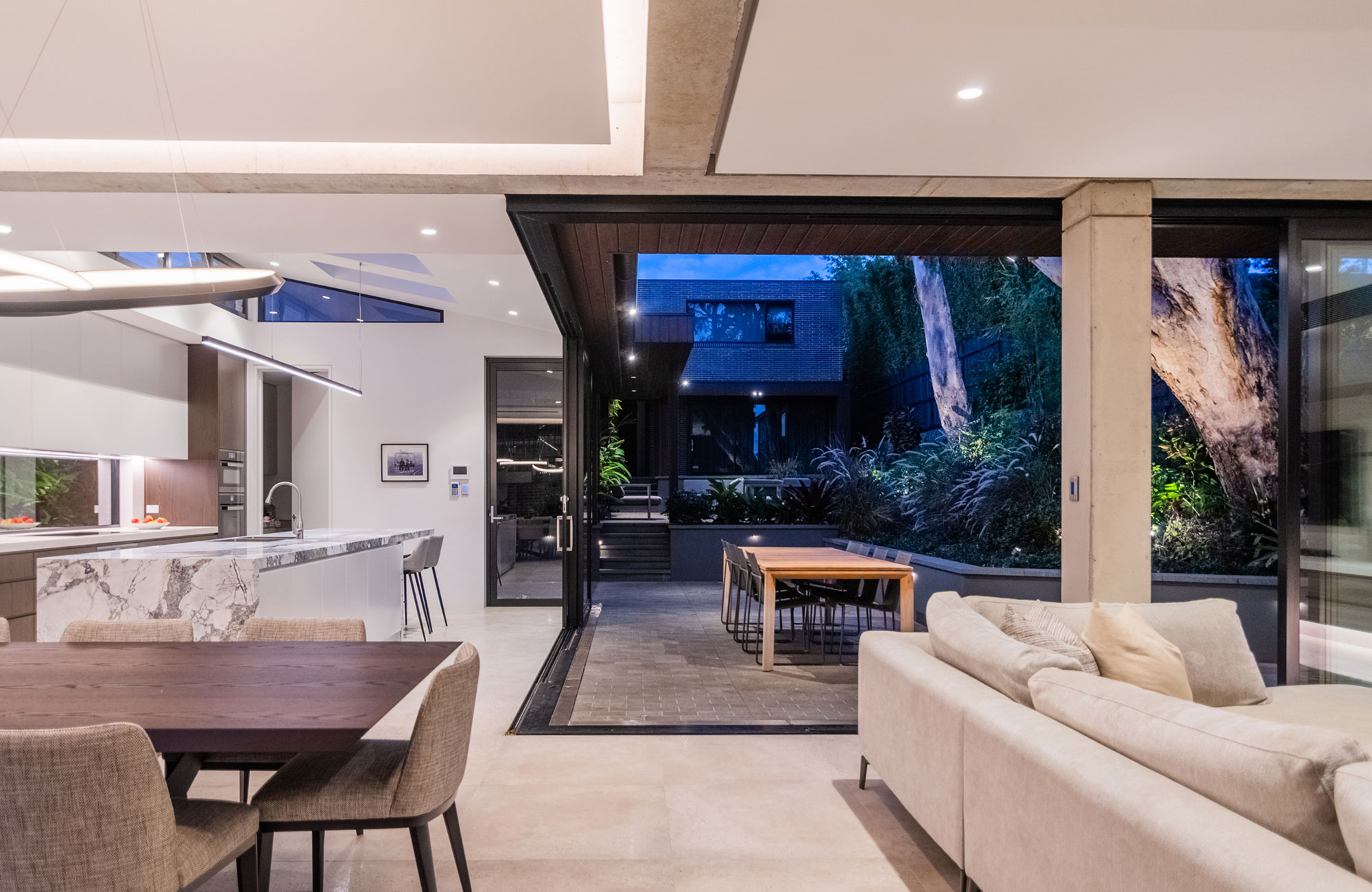 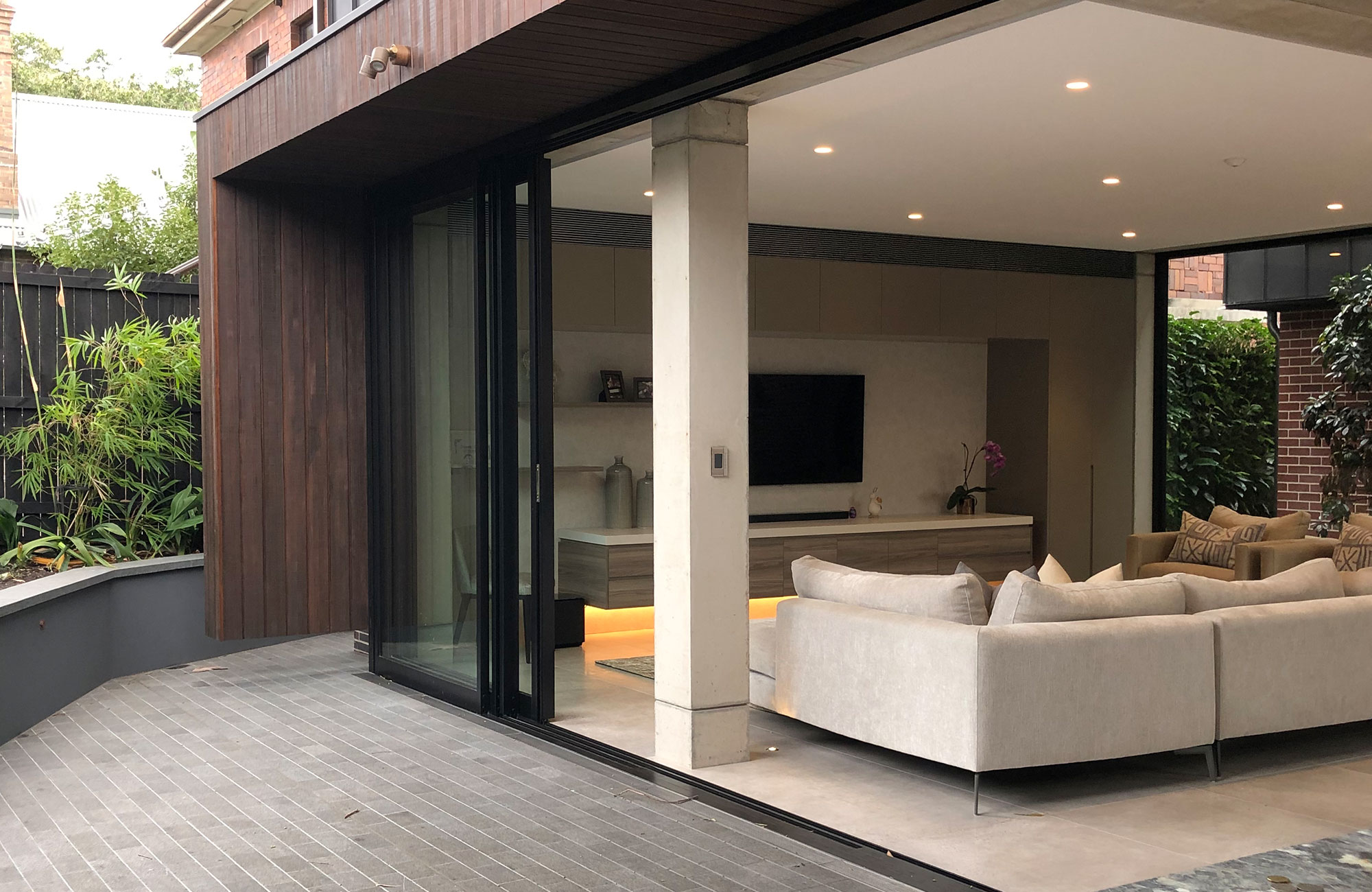 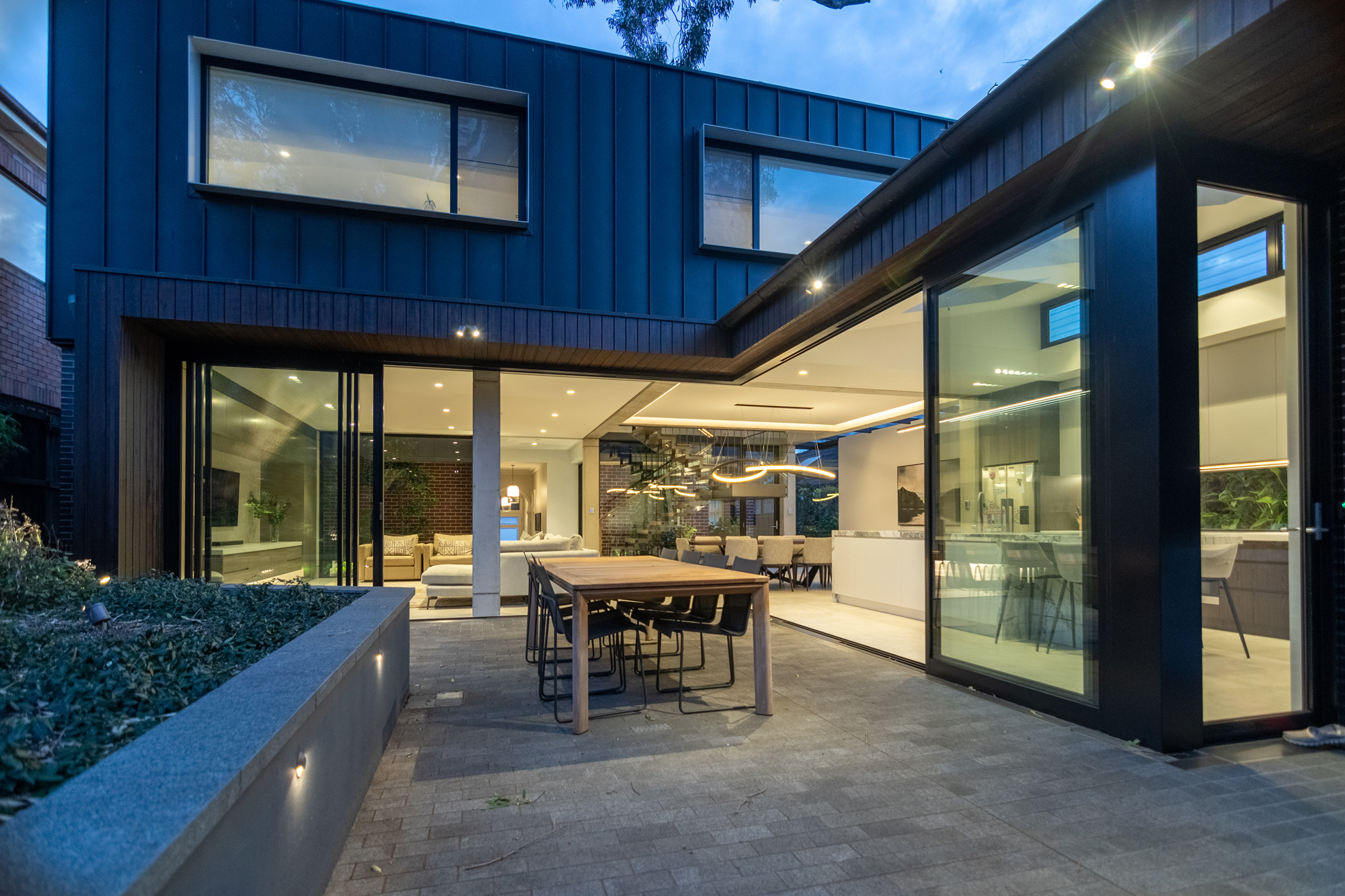 I met my clients through Karen Gordon, an interior designer I regularly work with. Their brief was a common one – the renovation of a very dilapidated house – which we had inspected together prior to purchase.

Located in a conservation area, the site is 60m in length, rising West-East up a 6.5m slope to a rear lane, and bounded to the north and south by three separate properties. Part of the rear had been previously sold to the northern neighbour, who had then built a two-storey garage and studio whose unsympathetic bulk impacted our site and reduced natural light to the rear garden. Two significant, eucalyptus trees, which had to be retained, blocked morning sun into the garden and rear of the house, creating complicated conditions at the rear of the site, where conservation conditions required much of the new work to be.

The design solution was to articulate the existing house and new extension with a 2m wide central court – a windowed passageway that brought northern light, ventilation, and vegetation into the heart of the house.

Landscaping was an integral part of defining the different areas of the property, weaving together the existing architectural character and new design and turning the garden into a significant part of the experience of living in the home. A formal front garden married the restraint of the renovated heritage façade; in the central courtyard, lusher vertical planting allowed for filtered light and mediated the original house and extension. In the rear garden a series of terraces, interspersed with native planting complimented the eucalyptus trees and created differentiated spaces as the site rose to the rear garage. At the house, a garden centred on one of the eucalyptus trees forms the corner of a loose courtyard whose other sides are bounded by the Living, Dining and Kitchen spaces; seamlessly integrating indoor and outdoor living. Further to the rear are two lawn areas, the lower being smaller in size and designed for an outdoor lounge, and the upper being larger and intended for play, opening off the childrens rumpus room beneath the garage.

When the perpendicular sets of sliding doors are retracted from the frameless corner, the threshold between inside and outside disappears and the large kitchen island becomes a centrepiece for the living spaces and garden, acting as a locus of activity connecting more distant parts of the site. The kitchens single-storey roof is pitched to the north with motorised louvres capturing the light and the arching branches of the eucalyptus tree overhead.

Attention was paid to creating an integrated architectural language, with the concrete frame and zinc cladding of the addition emphasising its distinction; a distinction softened with infill face brick that wove between the new and old. At the house, pre-stained timber detailing was used to transition between materials and integrated the new works into the landscaping through a long timber portico that rose up to the garage. This interplay of distinction through form and material, and re-connection through material and landscaping was a significant part of respecting the heritage character of the existing house whilst creating new spaces for the client’s growing family. They have been very happy with how the house’ larger communal areas give them space to relax together when work and school are over; and the separate zones for parents and kids have been an enormous benefit during covid lockdown. This is exactly the house they had hoped for.